Mairi Sutherland has over twenty years’ experience in programme production, working firstly as a freelance radio reporter for five years with BBC Scotland. She developed a successful career as a documentary features writer, presenter, interviewer and editor for radio programmes broadcast on BBC Scotland and Radio 5. Then she moved onto working for BBC Scotland Television as a researcher on the national BBC network programme First Light. In 1995, due to changes in local radio staffing she joined the independent film sector, where she gained first-hand experience working with Clan Wallace the fighting extras; technical assistance and inspiration for the Oscar winning film Braveheart. While with ‘The Clann’ she worked on the making of The Bruce starring Oliver Reed, giving her a valuable insight into the practicalities of filming on location in Scotland.

In March 1996 she joined Palm Tree Productions to work on publicity and marketing becoming a shareholder and co-owner. She went on to co-produce and co-own almost thirty Palm Tree films working with producer partner Robbie Moffat.

Mairi now has an impressive list of  'behind the scenes' production credits as Producer, Co-Producer, Executive Producer, Writer and Director as seen in her credits on imdb. In the trilogy Celtic Warrior she made a brief departure into the front of camera with her acting role, Beith the Pict, a comedy cameo.

Included in her credits she has written three screenplays and directed two feature films. She wrote Red Rose, about the life of the poet Robert Burns, which gained several awards at Film Festivals and went on to be translated into twelve different languages across Europe by HBO. After this she wrote and directed Photoshoot a film about paparazzi stalking an aging actress, which gained a Best Actress Festival award for the lead actor, Debbie Arnold. Her next screenplay, which she also directed called Going Green is a film about a family who find their house is repossessed - they up route themselves to make a new life.

The list of films Mairi has helped to produce are as follows - Love the One Your With, The Hawk and the Dove, The Bone Hunter, Winter Warrior, Finding Fortune, Rain Dogs, Red Rose, Axe Raiders, Cycle, Darkside of Heaven, Seven Crosses, Sister's Grimm, Photoshoot, Deep Lies, Conquering Heroes (aka Beast in the Basement), Got to Run, Crab Island, Villains. 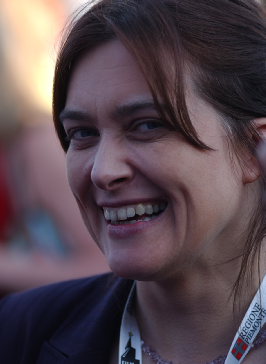